(a) In accordance with section 312(b) of the National Childhood Vaccine Injury Act of 1986, title III of Pub. L. 99-660, 100 Stat. 3779 (42 U.S.C. 300aa-1 note) and section 2114(c) of the Public Health Service Act (42 U.S.C.300aa-14(c)), the following is a table of vaccines, the injuries, disabilities, illnesses, conditions, and deaths resulting from the administration of such vaccines, and the time period in which the first symptom or manifestation of onset or of the significant aggravation of such injuries, disabilities, illnesses, conditions, and deaths is to occur after vaccine administration for purposes of receiving compensation under the Program: 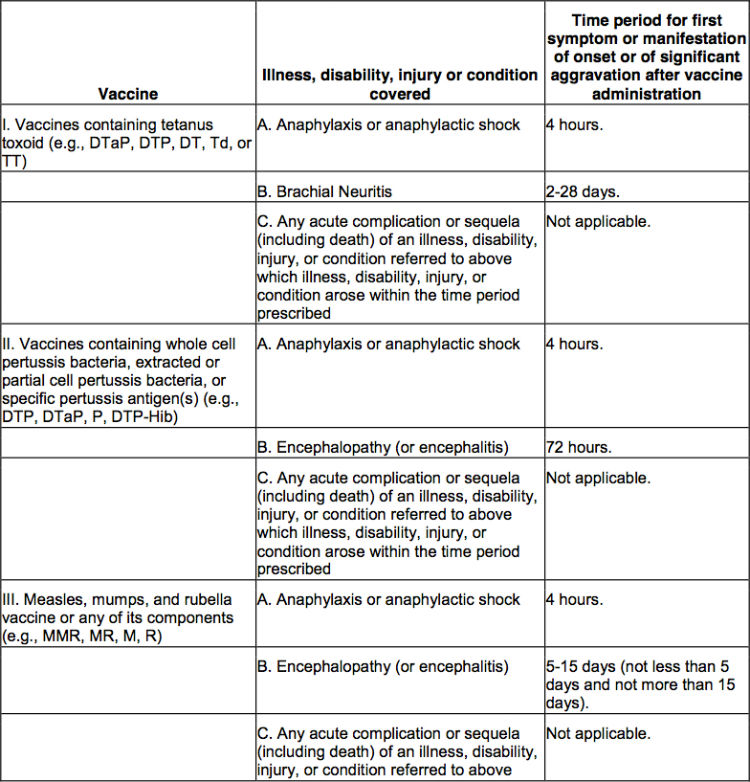 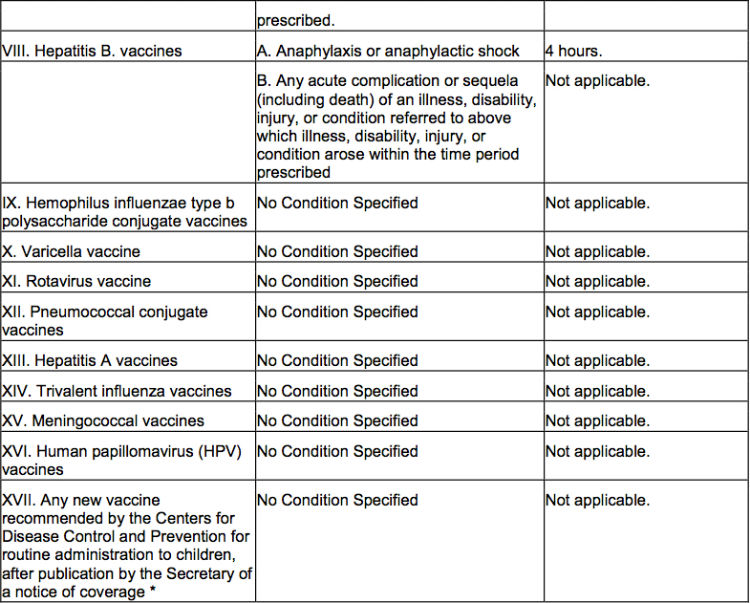 (1) Anaphylaxis and anaphylactic shock. For purposes of paragraph (a) of this section, Anaphylaxis and anaphylactic shock mean an acute, severe, and potentially lethal systemic allergic reaction. Most cases resolve without sequelae. Signs and symptoms begin minutes to a few hours after exposure. Death, if it occurs, usually results from airway obstruction caused by laryngeal edema or bronchospasm and may be associated with cardiovascular collapse. Other significant clinical signs and symptoms may include the following: Cyanosis, hypotension, bradycardia, tachycardia, arrhythmia, edema of the pharynx and/or trachea and/or larynx with stridor and dyspnea. Autopsy findings may include acute emphysema which results from lower respiratory tract obstruction, edema of the hypopharynx, epiglottis, larynx, or trchea and minimal findings of eosinophilia in the liver, spleen and lungs. When death occurs within minutes of exposure and without signs of respiratory distress, there may not be significant pathologic findings.

(2) Encephalopathy. For purposes of paragraph (a) of this section, a vaccine recipient shall be considered to have suffered an encephalopathy only if such recipient manifests, within the applicable period, an injury meeting the description below of an acute encephalopathy, and then a chronic encephalopathy persists in such person for more than 6 months beyond the date of vaccination.

(B) For adults and children 18 months of age or older, an acute encephalopathy is one that persists for at least 24 hours and characterized by at least two of the following:

(1) A significant change in mental status that is not medication related; specifically a confusional state, or a delirium, or a psychosis;

(2) A significantly decreased level of consciousness, which is independent of a seizure and cannot be attributed to the effects of medication; and

(3) A seizure associated with loss of consciousness.

(C) Increased intracranial pressure may be a clinical feature of acute encephalopathy in any age group.

(D) A “significantly decreased level of consciousness” is indicated by the presence of at least one of the following clinical signs for at least 24 hours or greater (see paragraphs (b)(2)(i)(A) and (b)(2)(i)(B) of this section for applicable timeframes):

(1) Decreased or absent response to environment (responds, if at all, only to loud voice or painful stimuli);

(2) Decreased or absent eye contact (does not fix gaze upon family members or other individuals); or

(3) Inconsistent or absent responses to external stimuli (does not recognize familiar people or things).

(iv) In determining whether or not an encephalopathy is a condition set forth in the Table, the Court shall consider the entire medical record.

(4) Seizure and convulsion. For purposes of paragraphs (b) (2) of this section, the terms, “seizure” and “convulsion” include myoclonic, generalized tonic-clonic (grand mal), and simple and complex partial seizures. Absence (petit mal) seizures shall not be considered to be a condition set forth in the Table. Jerking movements or staring episodes alone are not necessarily an indication of seizure activity.

(5) Sequela. The term “sequela” means a condition or event which was actually caused by a condition listed in the Vaccine Injury Table.

(6) Chronic Arthritis. (i) For purposes of paragraph (a) of this section, chronic arthritis may be found in a person with no history in the 3 years prior to vaccination of arthropathy (joint disease) on the basis of:

(A) Medical documentation, recorded within 30 days after the onset, of objective signs of acute arthritis (joint swelling) that occurred between 7 and 42 days after a rubella vaccination;

(B) Medical documentation (recorded within 3 years after the onset of acute arthritis) of the persistence of objective signs of intermittent or continuous arthritis for more than 6 months following vaccination; and

(C) Medical documentation of an antibody response to the rubella virus.

(ii) For purposes of paragraph (a) of this section, the following shall not be considered as chronic arthritis: Musculoskeletal disorders such as diffuse connective tissue diseases (including but not limited to rheumatoid arthritis, juvenile rheumatoid arthritis, systemic lupus erythematosus, systemic sclerosis, mixed connective tissue disease, polymyositis/determatomyositis, fibromyalgia, necrotizing vascultitis and vasculopathies and Sjögren's Syndrome), degenerative joint disease, infectious agents other than rubella (whether by direct invasion or as an immune reaction) metabolic and endocrine diseases, trauma, neoplasms, neuropathic disorders, bone and cartilage disorders and arthritis associated with ankylosing spondylitis, psoriasis, inflammatory bowel disease, Reiter's syndrome, or blood disorders.

(iii) Arthralgia (joint pain) or stiffness without joint swelling shall not be viewed as chronic arthritis for purposes of paragraph (a) of this section.

(7) Brachial neuritis. (i) This term is defined as dysfunction limited to the upper extremity nerve plexus (i.e., its trunks, divisions, or cords) without involvement of other peripheral (e.g., nerve roots or a single peripheral nerve) or central (e.g., spinal cord) nervous system structures. A deep, steady, often severe aching pain in the shoulder and upper arm usually heralds onset of the condition. The pain is followed in days or weeks by weakness and atrophy in upper extremity muscle groups. Sensory loss may accompany the motor deficits, but is generally a less notable clinical feature. The neuritis, or plexopathy, may be present on the same side as or the opposite side of the injection; it is sometimes bilateral, affecting both upper extremities.

(ii) Weakness is required before the diagnosis can be made. Motor, sensory, and reflex findings on physical examination and the results of nerve conduction and electromyographic studies must be consistent in confirming that dysfunction is attributable to the brachial plexus. The condition should thereby be distinguishable from conditions that may give rise to dysfunction of nerve roots (i.e., radiculopathies) and peripheral nerves (i.e., including multiple monoeuropathies), as well as other peripheral and central nervous system structures (e.g., cranial neuropathies and myelopathies).

(9) Vaccine-strain measles viral infection. This term is defined as a disease caused by the vaccine-strain that should be determined by vaccine-specific monoclonal antibody or polymerase chain reaction tests.

(4) Pneumococcal conjugate vaccines (Item XII of the Table) are included in the Table as of December 18, 1999.

(6) Trivalent influenza vaccines (Item XIV of the Table) are included on the Table as of July 1, 2005.

(7) Meningococcal vaccines and human papillomavirus vaccines (Items XV and XVI of the Table) are included on the Table as of February 1, 2007.

To obtain a copy of the latest table and Aids, visit the VICP Website. The Table and Aids listed above are current as of 3/22/2015.

If you or your child have been injured from a vaccine, contact our law firm today. Law Firm of Marvin Firestone, MD•JD, & Associates, LLP help clients get the compensation they deserve. We serve clients throughout the United States. Contact us today to schedule a free consultation by filling out our online form or calling 800-529-6353. 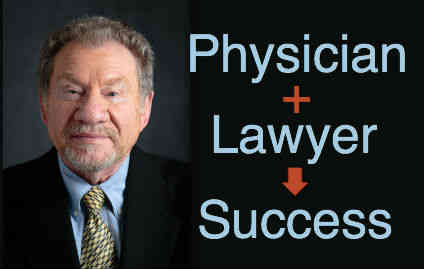 What Is Covered by the National Vaccine Injury Compensation Program?